Have you ever thought about going freelance on the SEO field but you do not know which are the most sought-after profiles and which are the best paid SEO fields? On this post I will show you some take-aways that I have gotten from a research that I did with some data from Upwork, one of the main platforms to find freelance jobs.

Where the data comes from?

To start with, let me introduce you to Upwork if you do not know how it works so that you can understand where the data comes from. Upwork is a sort of job portal where freelancers can sign up to find new opportunities and companies publish job offers. On the job offer, the job publishers can include a project description, the hourly rate that they are willing to pay for those services and the skills they are looking for, among other fields. Below we can see an example: 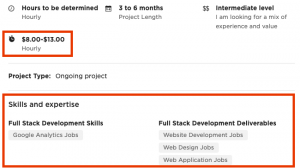 Basically for this research I have scrapped from Upwork 5.000 results which were given for the query “seo” and got the hourly rate and the skills and expertise. It is worth to mention that when it comes to the hourly rate field, as shown in the screenshot, a range is given so basically to get an exact number and make the data comparison easier I have used the average of the minimum and maximum. Afterwards, I have categorized these skills in different groups depending on their SEO areas and mainly I have ended up with nine big groups: Tracking & Analytics, Research, PPC, Content Management, Copywriting, On-Page, Technical, Social Media and Linkbuilding.

As you can observe, there are some groups which are not a specific SEO areas such as Social Media or PPC, however I still considered interesting to include them as once you take over some SEO freelance projects many times you are meant to take over PPC campaigns or Social Media activities as companies are seeking a person which can be in charge of most of the digital marketing activities. It must be the case for these job offerings because as mentioned previously these data is gotten by using the query “seo”.

On this post we will first go over a high-level overview of each of the nine classification groups and later on we will dig into each group and their specific required skills.

The raw data which was scraped from Upwork can be found over here, if you would like to do your own researches.

Considering the group classifications, we can see at first sight that the hourly rates range from around 20 dollars to 28 dollars, being linkbuilding the worst paid group and tracking and analytics the best one in financial terms. When it comes to job offerings, the most demanded skills are related to social media, although it is the second worst paid group, and copywriting.

On this table below we can see the results shown in a different way and sorted out by the best paid jobs:

The best paid jobs are related to Google Merchant Center, Campaign Reporting, Google Tag Manager, Budgeting and Forecasting and Marketing Automation, being paid over 30 dollars per hour. On the other hand, the worst paid jobs are related to MySQL, Marketing API integrations and SEO reporting, being paid under 21 dollars per hour.

The most demanded skill is Google Analytics, which is paid with around 27 dollars per hour.

Most of the projects are related to Keyword Researches, which are paid with around 26 dollars per hour.

The best paid jobs are related to strategy conceptualization, Google Shopping and Campaigns setups, being paid over 35 dollars per hour. On the other hand, those jobs related to Pinterest Ads, Snapchat Ads and pixel setups are the worst paid with under 20 dollars per hour.

The jobs which were the most demanded were the ones related to Google Ads, with around 350 occurrences.

The jobs which are related to strategy conceptualization, Active Campaigns, Press releases and Hubspot are the best jobs in financial terms, getting paid for them rates which range from 25 to 30 dollars per hour.

Most of the job offerings have an average hourly rate which ranges from 22 to 25 dollars, although there is an exception with the Email Communication jobs, with a very low rate being in the region of 7 dollars.

The most prevalent jobs are related to Content Writing.

The most demanded skills are those related to Copywriting Jobs and SEO writing jobs.

It is not a very varied group, having only 5 skills therein. The job rates fluctuate from 20 dollars to 26, being the Landing Page Jobs the best paid job and On-page Optimization Jobs the worst paid ones.

The most demanded skill is related to Landing Page jobs.

Speaking for myself, it was a surprise to see this category in such a low position when it comes to the average rates, being paid around 30 dollars per hour.

The most demanded skills are those ones related to WordPress and SEO Auditing.

The linkbuilding group is not very varied, having only 5 different skills and being paid around 20 dollars per hour.